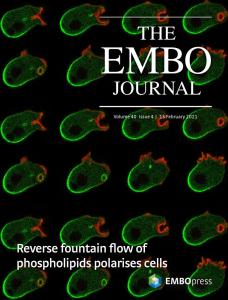 Abstract Mitoribosomes consist of ribosomal RNA and protein components, coordinated assembly of which is critical for function. We used mitoribosomes from Trypanosoma brucei with reduced RNA and increased protein mass to provide insights into the biogenesis of the mitoribosomal large subunit. Structural characterization of a stable assembly intermediate revealed 22 assembly factors, some of which have orthologues/counterparts/homologues in mammalian genomes. These assembly factors form a protein network that spans a distance of 180 Å, shielding the ribosomal RNA surface. The central protuberance and L7/L12 stalk are not assembled entirely and require removal of assembly factors and remodeling of the mitoribosomal proteins to become functional. The conserved proteins GTPBP7 and mt‐EngA are bound together at the subunit interface in proximity to the peptidyl transferase center. A mitochondrial acyl‐carrier protein plays a role in docking the L1 stalk, which needs to be repositioned during maturation. Additional enzymatically deactivated factors scaffold the assembly while the exit tunnel is blocked. Together, this extensive network of accessory factors stabilizes the immature sites and connects the functionally important regions of the mitoribosomal large subunit.