Our main interests are eukaryotic microorganisms infecting fish, amphibians and reptiles, including all aspects of their structure, biology, physiology, life cycles, host-parasite interactions, ecology and especially their phylogeny and evolution. Our main focus are the Myxozoa, extremely reduced fish parasites belonging to the Cnidaria, but we also study other interesting microparasites like e.g. amoebae, apicomplexans, microsporidians, ciliates or dinoflagellates. As part of our work we carry out research into a range of parasite problems which create economic and health consequences for the aquaculture industry, in collaboration with various academic and professional institutions worldwide.

Myxozoans are diverse group of cnidarian parasites, that have been morphologically highly reduced as an adaptation to parasitism and that have conquered a range of different aquatic habitats. Myxozoans have a complex life cycle involving a vertebrate (fish) and an invertebrate (bryozoan, polychaete or oligochaete) host and some species cause important losses in the aquaculture sector. We conduct a wide range of studies on myxozoans: 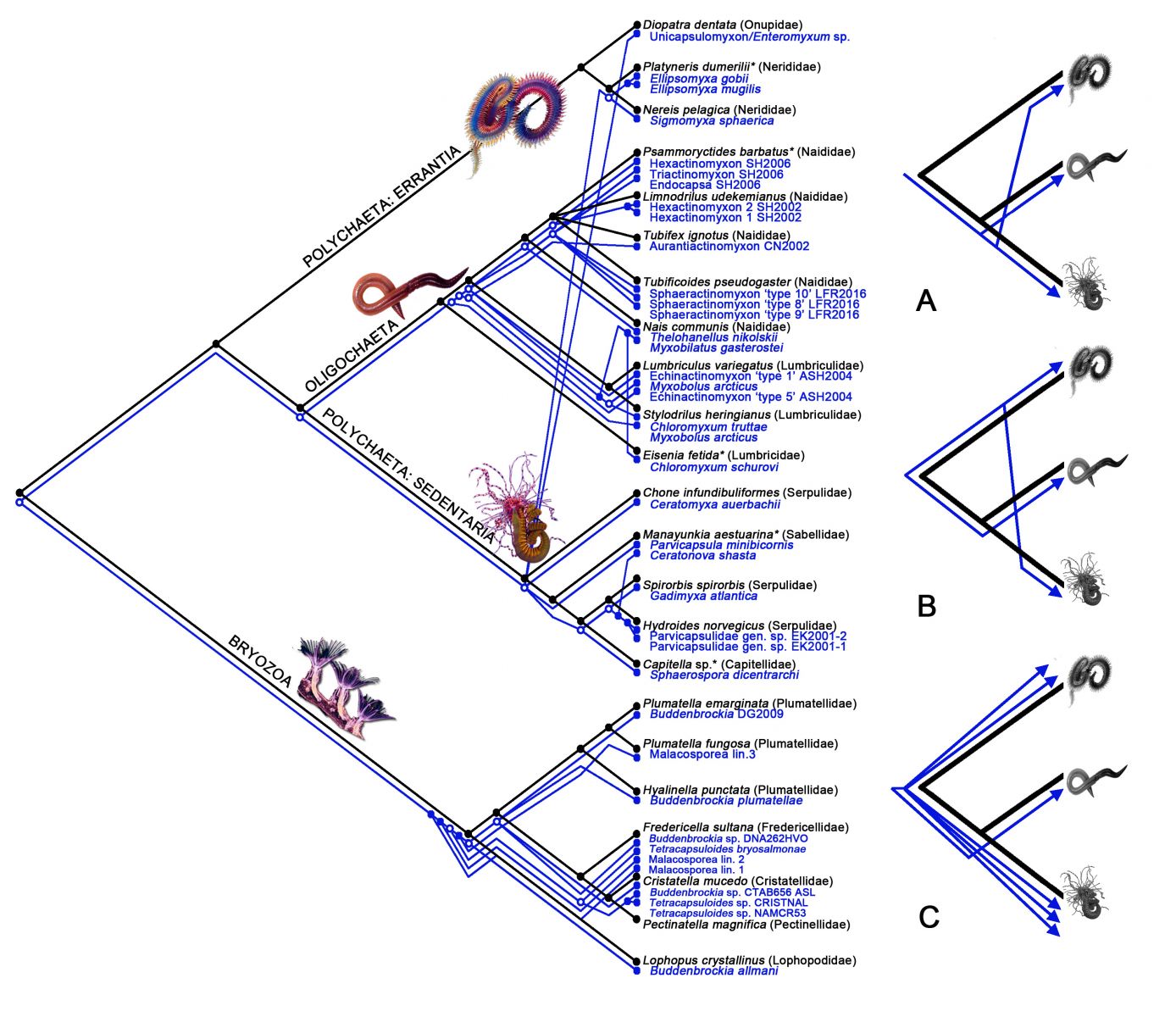 For historical reasons, current myxozoan taxonomy is based predominantly on the morphology and structure of the spores produced in the vertebrate (fish) host. However, phylogenetic relationships among the myxozoans based on different gene regions disagree with the traditional taxonomic classification: a number of myxosporeans with very similar spore morphology and belonging to the same genus were found to be phylogenetically distantly related, rendering most genera non-monophyletic. But how important is spore morphotype for the evolution of these highly reduced parasites? One of our principal aims is to investigate differences with regard to parasite development as well as life cycles and biology, in order to be able to understand why they cluster in different branches of the phylogenetic tree. By reconstructing the evolutionary history of myxozoans and their hosts, using dated metazoan trees and cophylogeny methods, we have recently demonstrated that myxozoans emerged approx. 700 mya and that they first invaded invertebrate hosts before including vertebrate hosts into their life cycles (Holzer et al. 2018, Mol Ecol 27:1651-1666). Following vertebrate invasion, fish hosts were acquired multiple times, leading to parallel cospeciation patterns in all major phylogentic lineages. We identified the acquisition of vertebrate hsots that facilitate alternative transmission and dispersion strategies as reason for the distinct success of the Myxozoa, and identify massive host specification-linked parasite diversification events. We currently study the beginning of the heteroxenous life cycle in myxozoans in old vertebrate hosts (Chondrichthyes and Agnatha; Lisnerová et al. 2020, Biology 9:10; Kodádková et al. 2015, Int J Parasitol 45:269-276) and try to understand how the secondary host was integrated into the life cycle of these parasites. The identification of characters and key events in myxosporean evolution lead to a better understanding of the broad diversity of modern species. Due to their microscopic size, cryptic nature and their ability to switch between different invertebrate and vertebrate host groups, we know virtually nothing about the true diversity of Myxozoa. However, the transmission from host to host involves the release of durable spore stages in the environment. Following marker design for different myxozoan lineages, we are currently analyzing eDNA sequences generated by high throughput sequencing of water filtrates and sediments from marine and freshwater habitats. Special focus lies on Central European water bodies whose myxozoan fauna in fish is well described (funded by the Czech Science Foundation), but also on comparing marine habitats from different latitudes (financed by the Swedish Research Council). Using this approach we have discovered new phylogenetic lineages, which allow deeper insights into myxozoan evolution and may even clarify the question of marine vs. freshwater origin of Myxozoa. In this context, we also investigate previously unexplored host groups by analyzing vertebrate and invertebrate taxa that have escaped our attention as potential myxozoan hosts to date but are implied as such by evolutionary studies.

A model organism for myxozoan research 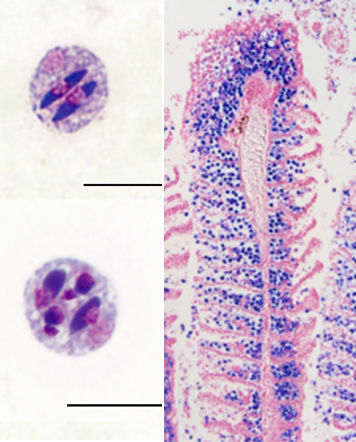 Functional research on myxozoan parasites is notoriously difficult and many aspects of their biology still lie in the dark. A major reason for the limited information is the absence of an in vitro model and the paucicity of in vivo models. Only a few life cycles are continuously perpetuated in research laboratories around the world, as their maintenance is laborious and time-consuming, with the production of fish-infective spore stages in oligochaete or polychaete cultures accounting for several weeks or months. We have recently established the first continuouse in vivo model for myxozoan pre-sporogonic proliferative stages. The model employs Sphaerospora molnari, a common parasite of common carp, Cyprinus carpio (Eszterbauer et al. 2013, Dis Aquat Org 104:59-57). In natural infections, S. molnari invades the epithelia of skin and gills where it forms spores and causes marked dystrophic changes and necrosis. Prior to spore formation, S. molnari proliferates in the blood of carp, forming highly motile blood stages (Hartigan et al. 2016, Sci Rep 6:39039). Our research model focusses on this early intrapiscine development and overcomes the problems related to the duration of spore formation in invertebrate hosts, by tranferring blood stages from fish to fish. We are also able to cultivate and multiply these stage over several days in vitro, and genomic and transcriptomic datasets are available to explore parasite and host genes.

The model hence allows us to investigate stage-specific gene expression, host-parasite interaction, as well as the identification of potential therapeutic targets (Hartigan et al. 2020, BMC Genomics 21:404). Most of the model research is funded by the European Commission under the RIA ParaFishControl, an important network contributing to mitigating parasitic diseases in European aquaculture.

We use transcriptomics and proteomics in combination with in vitro and in vivo experiments to better understand how myxozoan proliferative stages in carp blood are able to multiply rapidly in the host and to use resources effectively, while avoiding host immune defense mechanisms. Our model organism, S. molnari uses highly derived cytoplasmic actin to generate a completely novel type of cellular motility, which is of great importance for evading the attachment and lysis by host immune cells (Hartigan et al. 2016, Sci Rep 6:39093). Apart from this motility, S. molnari uses a wide repertoire of proteolytic enzymes to survive and propagate in the host blood, some of which are expressed only during proliferation and are of particular importance to the early propagation of the parasite infection in fish. We are currently describing and characterising some proteases and specific protease inhibitors biochemically. The main source of nutrients for the parasite's blood stages are red blood cells (Korytar et al. 2020, Parasite Immunol, 42:e12683). Their immunological responses and energy transfer/nutrition roles are under further investigation. In parallel, we explore the immunological reaction of carp to S. molnari which exists of several phases, an initial covert infection with minor prinflammatory characteristics which is skewed to a strong anti-inflammatory type once proliferative blood stages occur (Korytar et al. 2019, Parasit Vect 12:208). Additionally, we expanded the available knowledge of the kinetics of leukocytes subpopulations during the model infection and evaluated their proliferative capacity in main lmphoid organs. the proliferation led to a substantial increase in the number of circulating B lymphocytes producing S. molnari specific antibodies. These antibodies, exerting potent killing capacity in vitro, do not prevent the proliferation of the parasite in vivo, indicating a possible antibody evasion strategy employed by the parasite. Current work focuses on the characterization of changes in the antigenic composition during the parasite's life cycle and its impact on B cell responses.

Apart from our main focus on myxozoans, we investigate a wide diversity of protists in aquatic environments and hosts, studying their distribution, host-parasite interaction, pathology, ecology as well as functional and evolutionary aspects. Here’s some of our recent and ongoing research in our on lab and as collaborators:

Research into free-living and amphizoic amoebae

A large-scale phylogenomic study focussed on free-living testate amoebe because they have, due to their shells, a fossile record and can provide invaluable information on early eukaryote evolution. Based on 324 genes and 19 testate amoebae it was shown that the major lineages of testate amoebae were already diversified before the Sturtian glaciation (720 mya), supporting the hypothesis that massive eukaryotic diversification took place in the early Proterozoic (Lahr et al. unpublished). Applied research encompases studies on the pathological agent involved in outbreaks of amoebic gill disease (AGD) in Atlantic salmon in Northern Europe (Paramoeba perurans) and we are testing a variety of substances for their efficacy against P. perurans and their suitability as in-feed treatments against AGD. Most of this research is sponsored by the R&D department of Skretting Aquaculture Research Centre. We also screen for of a variety of pathogenic amoebae in water sources impacted by human actions, using molecular methods, and we have a unique, comprehensive culture collection of amphizoic amoebae from different aquatic habitats and hosts, with hundreds of different strains. 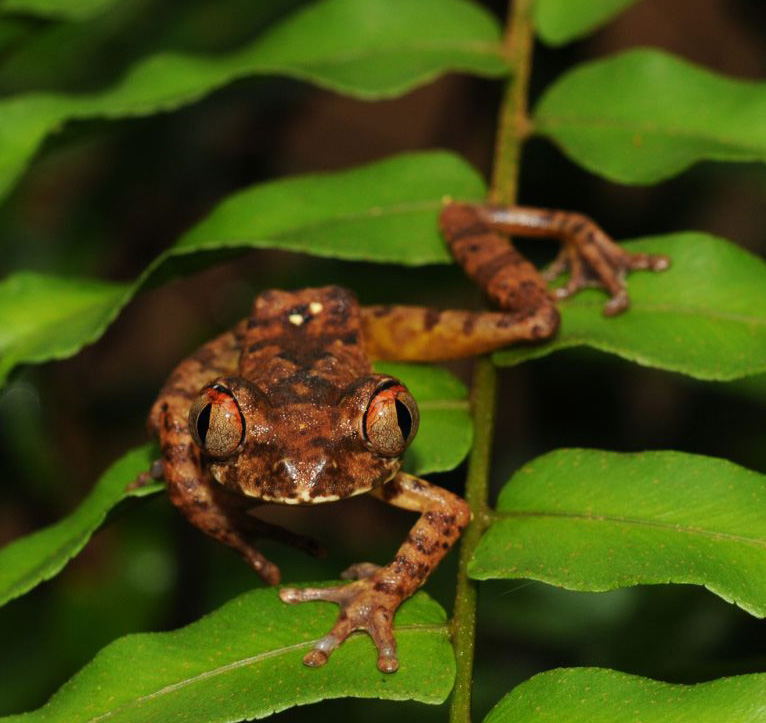 Previously, we discovered, classified and studied the diversity of perkinsid-like protists causing mass  mortalities of amphibian populations in the USA (Chambouvet et al. 2015, PNAS 112, E4743-E4751). More recently, we focussed on another important pathogen, Batrachochytrium dendrobatidis, chytrid fungus, one of the most devastating wildlife pathogens ever documented. We showed that B. dendrobatidis has destinct phylogenetic lineages, which vary in geographic extent and virulence, and we developed a genotyping method to better understand their distribution and interaction (Byrne et al. 2019, PNAS 116, 20382-20387). We can now better track pathways of disease spread in this system and link specific pathogen lineages to outbreaks in wild populations. Future research focusses on little studied geographic areas and at determining the impact of other pathogens on amphibian declines worldwide.